“Three people…Three people are dead…I killed them, send the police.” And so begins Death is the Only Mortal, the brand new album from hardcore stalwarts The Acacia Strain. If the introduction to the album puts you off or conjures up dark imagery in your mind, then it would be safe to label this album is a success. For the uninitiated, The Acacia Strain have been perfecting their sonic aural for nearly a decade now and this new album is by and large their best. 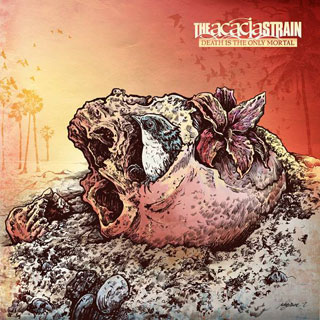 Two years ago TAS released Wormwood, their last for long time record label Prosthetic and have recently inked a deal with Rise Records. Where Wormwood failed on practically every level, especially coming off of 2008’s superb and ahead of the curve Continent, Death is the Only Mortal features a mix of all of their previous albums while at the same time manages to break new ground (something not all of their peers have been able to accomplish). What is immediately noticeable is the production; it’s crisp, clear and doesn’t over do the studio trickery involved on Wormwood. Sure there are a few parts where it sounds like the band hired a dj to cross fade the guitars, but for the most we get the down picked massive chuggary that TAS is known for. Also of note is the fact that the bass is, for once, far more audible than on past releases. I dare you to not bang your head during the opening moments of “Go to Sleep,” where lead vocalist Vincent “Don’t call me Vince” Bennett bellows ‘We pray for death!’ And in fact you might. This record is punishing without sounding contrived and is brutal without alienating the casual listener.

Many fans cried foul when it was announced that TAS had signed to Rise, this writer included. For a band as freaking heavy as they to sign to a flavor-of-the-week label was a head-scratching moment indeed, however guitarist DL assured fans that they would not be changing their sound to please record executives. It’s a partially true statement and not in a bad way I assure you. As stated above, there is still plenty of the heavy riffing, Vincent’s trademark bellowing nihilism, as well as drummer Kevin Boutot’s smooth and crushing work behind the skins (yeah, smooth AND crushing-listen and you’ll understand) and they still sound as pissed off as ever.

What is different this time around is the cohesion behind the record. Chalk that up to the band deciding to produce in house with guitarist DL handling the boards or possibly the excitement of being on a new record label. The results are stellar song writing and more focus on crafting a hook versus going balls out. Did I say hook? Don’t let that deter you, this isn’t your average Clear Channel fodder, nor does it sound like their label mates Asking Alexandria. Besides the better production, the album features a more Metal sound and less on the –core suffix.

See the epic album closer “House of Abandon,” at nearly seven minutes, it’s the second half of the song that shows immense growth from the band and features a lead reminiscent of Kirk Hammett. Another clear example of change is the focus on utilizing atmosphere and space. Not even a full minute and a half into “Time and Death and God,” the rhythm section takes a break and allows the guitars to do the talking, so to speak; when the band finally comes back in, the listener is bludgeoned to death by groove after thick groove of drop tuned intensity while Vincent whispers sweet nothing of despair. “The Chambered Nautilus” is sure to be a crowd pleaser, with its barn burning mid tempo groove and stop start riffing, you’ll find yourself humming this one as you fall asleep at night. Also worth mentioning is the drumming on this track, forgoing the typical blasting that most drummers in this genre find themselves using, Boutot opts for more controlled and precise hits that eventually knocks the listener in submission.

﻿﻿﻿
Vocalist Vincent Bennett has always been known for his outspoken demeanor and violent lyricism, and if one isn’t careful to read between the lines its might be easy to pass him off as another misogynistic knuckle dragging meat head. But with lines such as “Stop following your dreams, they will never come true,” or my personal favorite “’Sorry’ doesn’t pay the rent,” the message is clear: there is no hope for humanity. If you were looking for a positive album to help get you through the work week, this isn’t it. Having seen the band live a couple months back and hearing such wonderful and uplifting gems such as “Swing like your girlfriend said she was pregnant” and “Nothing but hate and contempt for all man kind” you had best clear out of the way if you’re not ready to mosh in your car, living room, or at worst, work cubicle.

This album isn’t likely to convert the nonbelievers. For those who find the endless riffing and chuggary boring, you won’t want to listen. If the occasional (and might I add tasteful) breakdown makes you cringe, go elsewhere. But, if you’re down for a head bang and/or need some new tunes for working out, let this album be your guide.

…oh, one more Bennettism (let’s see if we can coin that one): “Grab life by the throat and tear out its eyes.” Yeah, if that doesn’t inspire you to wreck something, I don’t know what will.

[Death is the Only Mortal came out Oct. 9 via Rise Records]

-Written by Grant's Tomb
Posted by T.Church at 10/13/2012
Email ThisBlogThis!Share to TwitterShare to FacebookShare to Pinterest

A little late,.but Asking Alexandria is on Sumerian Records, therefore, are not label mates of TAS.