Getting access to the Internet around here has been an insane and impossible task. It'd been easier to remove a fish hook lodged in the mouth of a crocodile, I swear... A fully awake large crocodile which hasn't eaten in about three weeks... Sitting on a pile of freshly laid eggs. But somehow I finagled it. It took me calling and getting our own Internet provider aside from the one I used to get from work, for the reasons I blogged about earlier. After the gentleman struggled for 5 hours setting it up, he left and it hasn't quite worked right since. In fact, it hasn't worked at all. I have spent the last two days switching wires, resetting modems, resetting routers, and switching the same wires. Tonight I pirated work's office router, which seems to be a good thing because suddenly and at last, I seem to have hit the right combination. For the first time in about three weeks, we are able to use high speed wireless Internet in my home. Tomorrow night Essie and I are driving to Des Moines to the first Halloween costume party I have been to in years. It should bring some photographic moments, as the reputation preceding this event is beyond legendary... I will be sure to post the madness. I have so much I want to say, having been absent for so long. I will let this be it for now, and catch you all up in good time, I guess. There is no way I would be able to tie it all together. The Hawkeyes are shocking the nation, and the Chiefs finally won a game a couple of weeks ago, the Cubs haven't lost in weeks, and hockey has been good to me too. In the non-sports world, I picked up a couple Yngwie Malmsteen CD's at a local thrift store for about a buck apiece last week that are in near new condition. That in itself would have been a 5000 word post, had I had access to the Internet. But I guess I will save you the drama... And maybe tell you the story that is associated with YM on a later date. I'll just say that sometimes I look back on my life and just ask myself how in the world did I pull that off. Tomorrow morning, with hopes of improving my hearing, I am having that procedure done where they drip candle wax into the ears to break up the earwax build up. That should be an extremely interesting procedure, and I look forward to to hearing real voices again, and not just the ones in my head. There's so much more... It truly is good to be back online. Have a safe and happy Halloween, everyone!
Posted by T.Church at 10/30/2009 2 comments: Links to this post
Email ThisBlogThis!Share to TwitterShare to FacebookShare to Pinterest

Essie and I have been playing a new game... It's called Truth or Derriere. We made it up this past week and a half while sans Internet. It's really easy to play: Essie asks me a question, which I usually opt not to answer, and take my chances with her derriere. It's a nice warm interlude to the coming winter which seems to be just around the corner... And I get to keep all of my secrets! Ah... Soooooooo good to be back online...
Posted by T.Church at 10/20/2009 No comments: Links to this post
Email ThisBlogThis!Share to TwitterShare to FacebookShare to Pinterest

Does Anyone Leave Comments Anymore?

I have not gone away... Or abandoned this blog. We have had some internet issues here at home as a direct result of somebody sucking all of the available bandwidth while playing online games a week or so ago. (It wasn't me.) I am connected to a wireless modem that I share with a few other households, plus the office computers, and because we live so far away from any town, there isn't a direct line that supports DSL out here. So, we are forced to use satellite internet, and unfortunately, it doesn't come with unlimited bandwidth. One day of gaming will suck up the month's allotment, as we all found out a week and a half ago... The good news is that we are slowly able to get online again, and the better news is that come next week, I wont have to rely on work's internet at all, as Essie and I will be connected to our very own hook-up of satellite internet. This will prevent this idiocy from ever happening again, I hope... Unless I get suddenly start playing World of Warcraft... Which, I hear, is addictive as crack cocaine. But that scenario not being likely, I think from here on out there shouldn't be too many problems. So yeah... Don't be a stranger. I haven't gone anywhere.
Posted by T.Church at 10/20/2009 2 comments: Links to this post
Email ThisBlogThis!Share to TwitterShare to FacebookShare to Pinterest

Hammer of the Gods 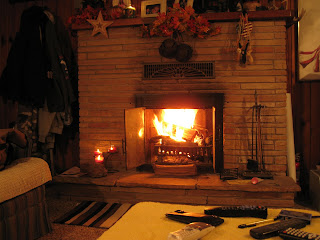 I built a fire tonight, the first one of the season. It created a beautiful backdrop for a cozy evening... Essie is making jewelry, and I am flipping back and forth from the Capitals/Flyers game on Versus and the baseball game on TBS. The scene in Minnesota must be pandemonium. It's the top of the 12th, and the Twins are tied with their divisional rivals, the Tigers, 5-5. I almost went to that game... But as fate had it, by the time I got around to calling the box office for a ticket this morning, the game had already been sold out. I was in Minneapolis already, an able witness to the Brett Favre circus that occurred the night before, fighting a hangover/lack of sleep combination that made my brain feel like it had been snapped in a mouse trap. Despite the morning cobwebs, it was a night I wont soon forget... Sports in Minneapolis are at a frenzy state right now. The Vikings are playing with the force of the mighty Thor, and the fans are whipped into a surrealistic and hypnotic state fueled by this frenzy like sharks in a sea of blood. The Vikes are the real deal... This I am now convinced of... And all the drama created by the retirement/unretirement of Brett Favre this summer has been forgotten. Watching Number 4 pick apart his former team amidst a human sea of purple will go down as one of my all time favorite sports memories... And I have a few. Viewing the game from a neutral standpoint made it all the more alluring, but also made me feel somewhat like an impostor... After all, what is a Chief fan doing at a sports event that is probably the single most hyped up game in the history of the Minnesota Vikings... Or Monday Night Football for that matter? I can't imagine that the Roman Coliseum ever rocked as loud and voracious as the Metrodome did last night. Throw in the fact that the Twins are battling for the final play-off spot tonight against the Tigers (which the Twins just won by the way, in the bottom of the 13th) and it would be easy to say that Minneapolis, Minnesota is the single most important place in the world right now in the world of sports. Wow. So yeah, I tried to get tickets to the baseball game tonight, but it wasn't in the cards. (I guess I could have squandered up to the Metrodome tailgating area and tried my hand at scalping, but that would have meant standing in the cold rain and probably dishing out two or three times the original value of the ticket.) Already tired, I decided instead to just come home, get in an afternoon nap, and enjoy the game(s) on TV next to the coziness of a fire while cuddling up with my sweetie... I LOVE this time of year.
Posted by T.Church at 10/06/2009 No comments: Links to this post
Email ThisBlogThis!Share to TwitterShare to FacebookShare to Pinterest

From my inbox this evening... 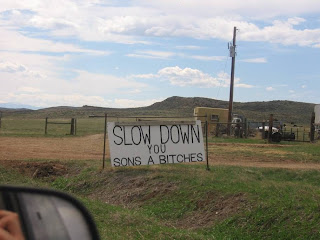 YeeeeHaaaaaw!
Posted by T.Church at 10/01/2009 No comments: Links to this post
Email ThisBlogThis!Share to TwitterShare to FacebookShare to Pinterest

Back at work today... And what a day it's been. Just got home and missed the Capitals opener, but see that they pounded the Bruins 4-1. Essie has given me the OK to get the NHL season ticket on Dish, but I haven't pulled the trigger just yet... $160 is a lot of money that could be useful elsewhere... And it's not like we got it laying around. Still, the allure is SO strong. I think if I had Tivo, it would be a no-brainer. That way I could at least guarantee seeing the games when I work late, as I did tonight. Turns out the game was on Versus, and I could have watched it had I been here... Things seem to go like that, huh? Yes they do... That's a big ten-four good buddy! Maybe I should forgo the NHL season ticket, and upgrade to Tivo...
Posted by T.Church at 10/01/2009 1 comment: Links to this post
Email ThisBlogThis!Share to TwitterShare to FacebookShare to Pinterest
Newer Posts Older Posts Home