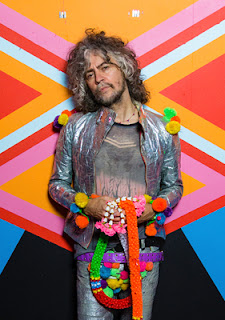 The Waterloo Center for the Arts (that's Waterloo, Iowa) are currently hosting an exhibition of artwork done by Wayne Coyne. Maybe you know him as the singer for the band the Flaming Lips, or maybe you don't. The band has been around for something like 30 years... and they've run the gamut  from drug punks to lysergic cartoon shamans, and who knows what else in between. They are definitely one very experimental band. But whether you love or hate the music, there is another facet to the world of Wayne. And you can check it out if you're so inclined and maybe you should be.


The first night of the exhibition had a reception where Wayne came and talked for a few minutes about the project, a little Q +A session, and then he made himself available to anyone who wanted to talk, shake his hand, and get an autograph and/or a picture with him. Wayne does seem like a pretty genuine guy who appears to really deeply appreciate the people who are interested in the things he does. I had arrived fashionably early for the reception as to check out the art. I did not get to experience it all as the crowds were a bit large, so I went back a day later to watch the movie in its entirety and to sit and check out the King's Mouth exhibit for the full recommended 15 minutes. There was a fair amount of stuff to check out. As to what was on exhibit, well:

ZAIREEKA
A small booth type area was set up in which the four record project was set up to play. The four records were designed to be played simultaneously on different record players or cd players, or whatever type of devices needed per the type way you have the music. Have fun setting that up to play at your next party. It is a pretty neat idea, and although weird, it was no weirder than their regular stuff. However I did not listen to the whole thing so I really can't comment on it that much.

THE SUN IS SICK
Wayne had two issues of a comic book on display, titled THE SUN IS SICK. Two copies of each issue were available so one could check out each issue's cover plus some of the interior. The comics were under glass and I really would have loved to have been able to sit back and read them, but security is the word of the day here. If they were just left out to peruse some punk would most certainly have copped the issues for himself. The artwork was thick and rich in color and texture. It reminded me just a little of the pre-code horror/sci fi comics with a little spirit of Steve Ditko thrown in. My appetite was surely whetted but I have no idea if it shall ever be sated. Wayne if your out there and reading this, any copies floating around for this humble narrator?


CHRISTMAS ON MARS
A film written, directed, and produced by Wayne and some other folks. It stars members of the Flaming Lips (Steven Drozd, Micheal Ivins, and Kliph Scurlock) as well as guys like Fred Armisan and Adam Goldberg. The film is pretty good in my humble opinion and I'm glad I went on another day and sat and watched the whole thing. Still not under the best of conditions due to all the other exhibits being cranked up pretty loud but the headphones helped some. I may actually get this thing on DVD. I could definitely have seen this thing being something they would have played on Night Flight back in the day had this thing been a thing back then. Midnight art film goodness. If the promise of a vagina-headed marching band doesn't make you want to see this then I guess nothing will.


KING'S MOUTH
This exhibit was sort of the marquee artifact of the whole shebang. An immersive sculpture kind of thing made out of all sorts of stuff including foam, Mylar, aluminum foil, lights, and god knows what else. I went back a day later to check this out along with the film because trying to get into this thing on the night of the reception was not going to happen. you crawl inside this thing and spend a really nice fifteen minutes being dazzled by lights and sounds synced up in a way that at times, and if in the right place can make you feel like your on some intergalactic journey. Some people said it is a nice simulation of tripping on LSD, I don't know if it felt quite like that, but it is certainly a nice and groovy thing indeed. I found it pretty relaxing and I think I want to build one in my basement to hang out in. On the wall across from the sculpture(?) are a group of pictures that are hung sequentially and they have text beside them telling the of King's Mouth. Having the myth added another dimension to the sculpture.

The exhibit runs from Feb. 16, 2017 to April 23, 2017. It is worth checking out if you have a little free time. If interested maybe you can contact your local art center and find out what it will take to get this exhibit in your neighborhood. Even better yet, go out and create some of your own weird art. Art is a link between the conscious and the subconscious, so the more links, windows, bridges, tunnels, and roads we have between them the cooler kind of world we get. 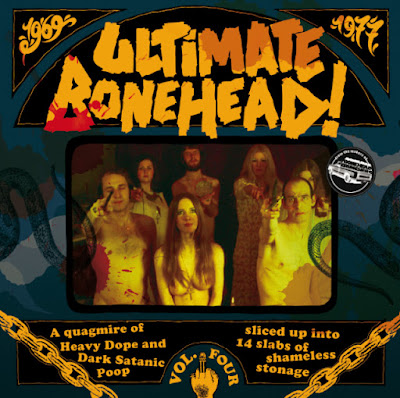 The cover lays it out for you in visuals and words. "A quagmire of heavy dope and dark satanic poop sliced up into 14 slabs of shameless stonage" Not sure how available this thing is anymore but if you see it you may want to do yourself a favor and snag a copy if the price is right for you. This record drips atmosphere - and oh what an atmosphere it is. Dredging up 45s from 1969 -'77, some of them probably so obscure that the bands don't even remember makin' 'em.

This is a nice compilation of garage psych madness that sounds like it being made by a bunch of devil worshiping hippies during a free form black mass jam; or zonked to the stratosphere Hell's Angels partying in Death Valley with a bunch of reptilians that live inside the hollow earth. In other words this is a fine record and is lots of fun. When  I was a little kid and didn't know really anything about rock n roll, this is the kind of sound that I heard (or imagined I heard) coming out of my friends older  brothers basement bedroom while we were playing with Hot Wheels. this is the sound of rock n roll that I have been chasing ever since I got into listening to the stuff.

The sound quality is not bad but at times can be a bit murky, but mostly it sounds good. I've heard much, much worse (like those old Stooges bootlegs that sound like they were recorded with a cassette recorder in the trunk of a car in the parking lot of the club they were playing). Ultimate Bonehead is related to the Bonehead Crushers and Bonehead Crunchers compilation also put out by Belter. So pick this up and make your record collection the envy of your neighborhood.

Posted by David at 2/12/2017 No comments:
Email ThisBlogThis!Share to TwitterShare to FacebookShare to Pinterest
Newer Posts Older Posts Home