I've been watching the Sharks/Blackhawks game for a little over an hour now, and really could give a shit I guess... For me watching the Sharks skate against the Blackhawks is the equivilent to watching the Oakland A's play the Kansas City Royals in baseball. It has no value to me from a fan's standpoint, only that it is indeed hockey, and thus automatically more entertaining than anything else that is on television. 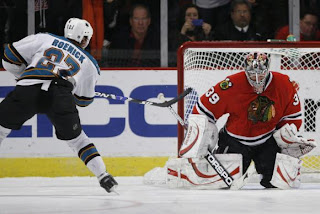 What has my attention though is a commercial that keeps coming on at each network break. It's for a show called AX MEN and it airs on the History Channel. (I have never heard of this show, but apparently it is entering it's second season.) The commercial starts out in a swamp scene, with a man's head slowly raising up out of the water. Of course my first thought is that it might be an advertisement for the Army, or perhaps a movie about some renegade Navy Seals. But no... The man continues to rise up out of the water to a point where it is evident that he is carrying a GIANT chainsaw, which he immediately fires up and uses to dice up a fallen tree log. Then these words appear on the television screen: 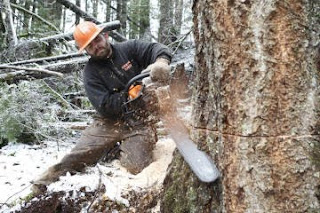 I never would have guessed that there was a market for viewers to watch giant bearded men slicing up lumber. But then again I never would have thought that there would be a market for watching fat people compete against eachother in a race to lose weight. Nonetheless this show does in fact exist, and for what it's worth it's pilot made it off of the cutting room floor and is now steamrolling into it's 2nd season. I'm trying to imagine what entertainment value this show could produce. Maybe these guys are out saving kittens from high tree tops and giving them back to little girls in a happily ever after world, or perhaps there is a scenario where a guy is trapped underneath a fallen tree and the AX MEN come to cut him free...

What I do not get is why an AX MAN would rise up out of a swamp in seemingly stealth mode then immediately fire up his blazingly loud chainsaw and start gnawing into the carcass of a fallen tree. The noise would be a dead give-away that he was in the area, ruining his chance at a surprise attack...

Maybe he came up out of the swamp Rambo-style in effect to sneak up on whatever it is that lumberjacks sneak up on, and in his pursuit of silent stalking he noticed the knocked-over tree, and just couldn't help himself. He is, afterall equiped with an over-sized chainsaw...

Whatever that man's motive, that commercial was an unintentional diversion to the hockey game, and though I was seeing the game, I wasn't watching it. It ended with me not knowing the score. All I've thought about this past hour is those damned AX MEN and the reality that reality television has gotten way out of hand... I can't imagine what they will think of next.

Whatever it is, I sure hope that there will be a hockey game showing on another channel...

Posted by T.Church at 12/22/2009
Email ThisBlogThis!Share to TwitterShare to FacebookShare to Pinterest

You mean to tell me you're not excited about Steven Seagal Lawman. I think that show is going to define quality entertainment.

I never would have guessed that there was a market for viewers to watch giant bearded men slicing up lumber.

As long as there are people like my brother in the world, there will be a market for shows like this.

A belated Merry Christmas (and a non-belated Happy Boxing Day!) to you and yours! And may you have a happy and prosperous New Year (more prosperous than mine, fer sure)!

Len, I get what you are saying. I fell victim to my Father's television schedule these last couple days... There is a show on MTV2 that's called Silent Library. First of all I was surprised that my dad even knew what MTV was, let alone MTV2, and I will just say that this show might be the worse TV I have ever seen... (I was also subject to the weather channel for 2 days straight, Dr. Oz, and episode after episode of another MTV headache, Punk'd.

Merry Christmas to you and yours too, Len. And Happy New Year.
Thanks for all your support.