Theoretically, Lyle Blackburn is a perfect fit for The Bigfoot Diaries.

He is an author of books, a Bigfoot aficionado, and an accomplished musician. He is the front man and founder of Ghoultown, a Texas-based horror rock outfit that combines the charisma of Rob Zombie and the cryptid bad-assness of San Diego's Deadbolt. They have played to audiences nation-wide from the infamous CBGB bar in New York City to swanky dance halls in southern California, all the while leaving a hell-infused trail of fire in their wake.

Lyle is also a featured contributor to the horror magazine Rue Morgue, and acts as the publication's cryptozoology advisor. His own blog, Monstro Bizzaro is a subsidiary of the Rue Morgue website, and he heads a column called "Monstro Bizarro Presents" which runs as a monthly column in the print magazine. He has also made contributions to Cryptomundo.com and has been tagged for speaking engagements at paranormal conferences and horror conventions all over the United States.

Most recently he has been touting his book, The Beast of Boggy Creek: The True Story of the Fouke Monster which is gaining critical acclaim amongst the Who's Who in the kingdom of Cryptozoology.

While I'd eventually like to engage Lyle in a conversation about Ghoultown, I have always been fascinated with stories of the legendary Fouke Monster which hails from the swampy southern border of Arkansas. Ever since my parents took my brother and I to see The Legend of Boggy Creek at the Drive-In in Newton, Iowa during the summer of 1973 I have been tuned into this creature, who's bellowing howls and hyper-aggressive nature kept me awake many-a-night during my childhood. The original screening boasted that "This Movie Will Scare The Hell Out Of You," and it certainly did me... Even now, as I occasionally watch it on DVD I am taken back to that anxiety that this film caused me during my childhood.

Without a doubt, this film is solely responsible for my lifelong fascination with the Bigfoot phenomenon, and is the catalyst for what has become my personal creative muse. It's only natural that I talk to Lyle Blackburn about his book and his thoughts on this menacing beast.

Tell me about your childhood and what influenced your interest in Bigfoot.

I loved horror movies and monsters right from the beginning.  I used to stay up late on Saturday night – or at least try – and watch the old black and white horror classics on television.  I had all the Aurora model kits and Halloween was my favorite day… year round.  None of that stuff really scared me, in the sense of being actually frightened, but when it came to the paranormal stuff like ghosts, UFOs, and cryptids, that really spooked me.  But I loved it.  I collected a lot of the strange-but-true type books when I was a kid, but seeing the Patterson-Gimlin film on television and watching The Legend of Boggy Creek got me totally hooked.  I’ve had an interest in cryptozoology, and especially bigfoot, ever since.


Your book, The Beast of Boggy Creek, is one in a long line of books and movies about this legendary creature. What does your book feature that is absent in other related media?

There’s never been a book that covers the complete history of the Fouke Monster and the making of the movie, so it’s the first in that sense and one reason I wanted to write it.  Other bigfoot books have covered a few of the sightings, and Smokey Crabtree’s memoirs offer his point of view, but that’s quite different than having the full story all in one place.  My book offers quite a lot that will be new information to cryptozoology buffs and horror fans alike.  Unless you have access to all of the old Texarkana Gazette newspapers, you probably have no idea of the number of reports and the crazy stuff that went on back in the 1970s.  Let alone all the amazing sightings since then and all of the old word-of-mouth stories I dug up going back as far as 1908.  I also worked with the Pierce family in order to cover the movie-making process.  And there’s a lot of details about my own personal experiences, such as my trips into the swamps out there, and personally seeing some strange things such as the skeletal remains of a very large animal - found back in 1991 - that some people have claimed to be remains of a Fouke creature.  So even if someone thinks they know all there is to know about the Fouke Monster, I guarantee they haven’t ever heard the full story.  Just parts and pieces – like myself – before I really started going up there and researching for the last few years.

Having Loren Coleman on board (he penned the Foreword) gives you instant credibility. How were you able to get him involved?

I spent some time with Loren when I visited his International Cryptozoology Museum in Portland, Maine a couple of years ago.  I’ve also contributed to Loren and Craig Woolheater’s Cryptomundo website, so I’ve know Loren for awhile.  I knew he was very influenced by The Legend of Boggy Creek movie, so I thought it would be appropriate if he could write the foreword.  He liked the idea, so he agreed to do it.

What personality traits does the Fouke Monster possess which make it different from other known Bigfoot-type creatures in North America?

In many ways the creature is similar, but it definitely has some distinct traits in that it seems to be leaner, meaner, and hairier; maybe because of the swampland environment from which it comes.  For example, it’s usually described as being no more than seven feet tall… unlike bigfoot which is sometimes reported to be up to ten feet, and not as bulky.  The Fouke creature’s hair is said to be longer and more unkempt, and in many cases, witnesses report a foul odor, which is more along the lines of skunk ape reports.

What, in your opinion, makes Bigfoot so elusive to humans?

The creatures are obviously experts at survive and evade techniques.  If I were them, I would avoid humans too!

Have you had any personal encounters?

I haven’t had any encounters myself, but I’ve listened to so many unexplainable stories from friends and other credible people, I have to keep it open for possibility. On one hand I’m just naturally attracted to these sort of real life mysteries, but on the other hand, I do believe that something might just exist out there that we haven’t accounted for. 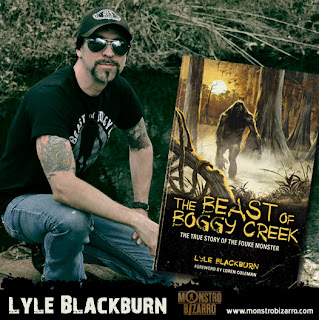 Posted by T.Church at 3/25/2012
Email ThisBlogThis!Share to TwitterShare to FacebookShare to Pinterest