I first contacted him about doing an interview back in July with the promise of it being written and quickly published. Then suddenly I found myself engulfed with real life, and I kind of put the project on hold. I stayed away from the blog for several weeks, and Greg's interview became a casualty of that... It was never my intention to take the hiatus, it is just the way it worked out. Sometimes the way things "work out" means that things don't work out at all... This was one of those times.


A couple of exchanges through email I promised Greg that I would get on it... Have the article written up, and get it published. For reasons only nature can explain, my creativity glands had turned themselves off, and through what could only be called a lack of fortitude, I never quite set the gears in motion to accomplish that.


My last email was just a few days ago, and I simply told Greg that I had fallen into a funk and was hopefully pulling myself out of it... Once again I told him that I'd get this written up and that I was extremely sorry for stretching this out for so long... And as he has been throughout this entire process, he was extremely gracious, told me that he has suffered from creative drought himself, and that he understood. He put me under no pressure... In a nutshell he told me to get to it when I could.


Well here we are.


You might be asking yourself  Who in the world is Greg Tenac Waldrop? I have found that question to be one that is somewhat hard to give a direct answer to... Basically he is just a normal guy who lives in the Des Moines area and has a very strong love for music. He has incorporated a business (for lack of better word) called Dangerous Music inc.which takes his passion for music to a higher level... And with his business partner Jeff Anderson, they have taken it upon themselves to promote the local music scene through photos, videos, and any other medium that they can use to keep their "hobby" going. If you are in a local band, then you might be familiar with Dangerous Music inc. Perhaps they have produced and posted videos of your band on youtube, or on other social networks... Or anywhere else that they could promote your band and the local live music scene. 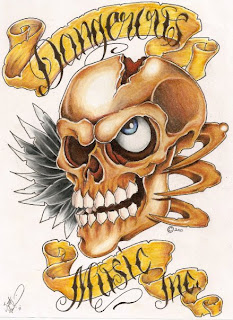 You might remember me mentioning DMi back when I did the Five Questions with Jacob County segment. It was they who produced the video that went along with his interview, and it is just a sample of what they are capable of doing to support the live music scene in central Iowa... Here is another sample:

Perhaps the most wonderful thing about DMi, is that they are not limited in their capacity, and they will do anything that they can within their power to keep this hobby alive. For the amount of time that they put into it, and for what they get financially out of it (which is next to nothing), it is quite remarkable what they have accomplished. As far as I know, nobody else is doing what they are doing, especially in the central Iowa music market... Because it is so hard to accurately describe what it is that Greg and Jeff do, lets go directly to the source...


1. What is Dangerous Music inc., and how did it get started?


Well, Dangerous Music Inc. is........for lack of better words, hard to describe. We set out with the original intent of reviewing shows and concerts that people couldn't attend. This intention for DMi changed when we found ourselves frequenting more local shows than national ones. The local bands here in Des Moines let us take tons of photos and videos of their performances and we slowly started to post them on myspace and youtube. People then started to look to us for live videos of their favorite Des Moines bands. So I guess you could say that DMi is an extreme love and support system for local music. It got it's start by a couple of guys sitting around wondering how we could give back to music what it has given to us our entire lives.


2. Do you still do anything for national bands?


We still attend the shows that we can, but we don't really review them anymore. Sometimes we'll catch some video of "big names", but we have to be careful about what we post due to their road managers and record companies not getting paid for what we do. Sometimes the bands themselves will ask us not to post live footage because they feel the audio isn't very good quality.

3. Is that how you came up with the name Dangerous Music Inc?
Actually we wanted the abbreviation of our name to be an acronym for Des Moines and the Inc came later when we filed with the state to reserve our name legally. When we were trying to think of a name there were three of us at the time and we all decided that the Dangerous part just fit.
4.  Please tell me about the film documentary that Dangerous Music is making...
We want to show where the music is on a local level. This film is art filled with artists. We want to tell the story that we see. We want to give the artists a chance to tell their stories about life, music and their experiences, struggles and expectations.
5.  Imagine this as one question...  How does a band become affiliated with Dangerous Music?... Do you find the bands or do they find you? Are there any specific qualifications... Such as dues? Have you ever turned bands away?


We aren't really affiliated with anyone. We certainly try to get to all of the shows we can to check out every band possible, but unfortunately real life doesn't work that way, at least for now! Some bands have contacted us to come check them out at shows, and some we just end up seeing by pure coincidence. Others have somewhat of a legacy surrounding themselves and you plan on going to those shows with the intent of shooting a great live video. We haven't charged anyone for what we do so far. I guess for the simple fact that we haven't marketed ourselves that way. We just put a Calous video on youtube that we would like to have all our live videos look like, I think once we make this the standard for our live videos then bands would have no problem paying for quality videos and performances of themselves. We usually can't say no to a band simply because we love music. We have, however, missed shows that we wanted to attend due to previously planned activities. This isn't a full time job for us so we have a lot of freedom with what we do.


Man this is a shame... Only 5 questions. I feel like this could go on forever. Maybe you know the routine here... We ask 5 questions for the segment, and then throw in a bonus question that kind of comes out of left field. I think with this interview because of what you guys do and the way you do things, and because DMi is such an original and worthwhile venture, I'd like to keep it more on task.


(Bonus question): I have heard you refer to "we" several times during this interview. How many people are in DMi (not including the bands) and how and what can people do do help you out? Please feel free to include any other information that you would like us to know.


"We" refers to myself  and the other half which is Jeff Anderson who takes care of most of the roaming camera work that you see in our videos. Our wives help out quite a bit with video and writing opinions when needed, and we have another video editor as well. I guess you could say there are five of us, but Jeff and I keep it going. I think bands and individuals do a great job helping us just by allowing us to shoot our cameras everywhere at shows. I think as long as people are receptive to what we do, it fuels the fire enough to keep us going. A free beer at a show never hurt anyone either! Ha-hah! All kidding aside, just keep watching and commenting on the videos.


I would like to add a little something; This started as a hobby and has turned in to more of a serious venture for Jeff and I. I think we have a good opportunity to not only showcase our talents as biographers of a culture, but also that of a very talented cast of musicians.


If you want to support these guys in any way, or if you are in a band and would like DMi to contact you, leave a message in the comments section. As I said, what these guys do is extremely rare, and given the fact that they do it for a hobby and for practically nothing says so much about their passion.


I think it is completely safe to say that Dangerous Music inc. is just as important as the music itself.


Thank you Greg and Jeff...
Posted by T.Church at 9/14/2010
Email ThisBlogThis!Share to TwitterShare to FacebookShare to Pinterest

you guys rock. I can't think of a more noble cause since these musicians bust their asses to play the music they love for no money and hardly any viewers most of the time. Kids now days need to see what they're missing in the real world by never leaving the computer.