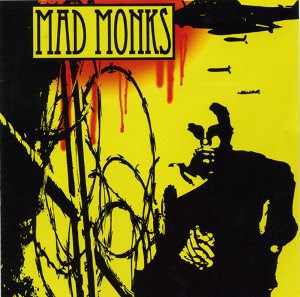 I was just given two different CD's recently. The first one was given to me by a guy who said I might really like this punk band and should give them a listen. Well I did and I gave the CD back to the guy telling him thanks, but it wasn't really my cup of tea. I was being kind. I found nothing punk about the band at all, in fact they were bland pop. The Jonas Brothers are more punk than those wannabes, so I have really needed something to wash out the bad taste left behind from those posers.

In my moment of desperation Troy, the head honcho here at Bigfoot Diaries HQ sent me this Mad Monks disk for review. So we will thankfully get to deal with a much finer piece of music than the previously mentioned turd. The first thing that hit me about these guys is how they really conjure up that early '70's heavy psych feel. I'm not saying it sounds dated (and I would have had zero problems with that anyway), although had Troy told me this was some band from 1972 that he had run across I probably would have believed him, but it really does have that over all essence of '70s psychedelic heavy rock. If you like stuff like Sir Lord Baltimore or the Pink Faries you will most likely get into these guys. Heck, these cats are a lot better than Atomic Rooster.

There almost seems to be some kind of alchemical process at work here. James Edel's guitar snakes, twists and spirals around into a slow burn intensity and then seers. Truly some great psychedelic playing here. Matt Larson weaves in some real funky groove rhythms with his bass lines and Eric Dirks drums almost seem like he's playing jazz. Add Matt Larson's vocals into the mix and it all comes together into a cohesive solid sound that hits in all the right places. It's heavy yeah, but not necessarily in an immediate sense, there is a certain almost subtle intensity to it at times. I could almost expect to hear this on some cool film noir soundtrack. Like I said psychedelic, but also containing the right amounts of underlying funk and jazz elements that make this its own kind of animal. I have heard a number of bands try to do what these guys do. Many, probably most, fall flat. These guys have a real solid sound and pretty good musical chops. Most assuredly worth your time. Buy the CD here, and do drop in on these guys if they happen to play in your neck of the woods. Good times, man. Good times.

Mad Monks are a mind fuck live! Especially with a few additives...

Mad Monks are a mind fuck live! Especially with a few additives...