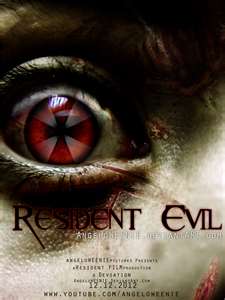 Horror movies and heavy metal go hand in hand, like peanut butter and chocolate. The smooth sweet flavor of the almighty guitar crunch mixes with the dark nature of the films so perfectly which is why you rarely ever see any other genre of music on a soundtrack for a horror movie (there is a track by Method Man on the Resident Evil soundtrack). But why is this? Could it be metal's penchant for dark imagery and death or the general, and I said general, lack of acceptance from the mainstream? With those thoughts aside, like horror films themselves, there have been some really terrible soundtracks that either make no sense as to an artist’s inclusion or act as a simple cash grab/sampler for a record label. A good soundtrack, for any genre of film will include unreleased or songs specifically composed for said film, but more often than not, this isn’t the case. In this blog, I’ll be discussing what has worked and what has not for horror movie soundtracks and the inclusion of certain artists.

In 2006, we were “blessed” with a remake of Wes Cravens classic The Hills Have Eyes, with a soundtrack boasting the likes of Moot Davis, Webb Pierce, and of course The Mamas and the Papas. However, a year later 2007 brought us the completely unneeded The Hills Have Eyes 2, with an equally unnecessary soundtrack featuring, you guessed it, metal. So just what was included on a soundtrack? All previously released songs in an incoherent order, none of which are featured in the actual film itself. Take the opener ‘My Fork In The Road (Your Knife In My Back)’ by stellar sell-outs Atreyu for instance. The song itself is okay, but what does a song about your best friend ripping you off have to do with mutant hillbillies attacking and raping people? Or the next song, the completely excellent dark pop stomp of Dillinger Escape Plan’s ‘Unretrofied,’ released a good three years before the actual movie, detailing the after effects of a car crash have to do with the above? The soundtrack is rounded out by other popular metal acts (Shadows Fall, Through the Eyes of the Dead, The Number 12 Looks Like You, As I Lay Dying), contributing songs that all came out months if not at least a full year before the film. The only real artist that contributed a song to the album that seems to make any sense here is the ridiculously stupid Lordi, who could have very well been the mutant cannibal the film was so gloriously portraying. 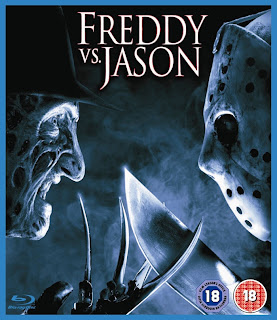 2003 saw the release of the infinitely disappointing meeting between Jason Voorhees and Freddy Krueger in New Line Cinemas Freddy vs. Jason. But unlike the completely stupid, plotless slasher flick, the soundtrack solidly drove a nail through the heart of metal fans. Released by Roadrunner Records, the soundtrack boasts previously unreleased songs (at the time) as well as several hard to find b-sides from its roster of metal/metalcore artists. The soundtrack is notable as it includes the first new recording from Killswitch Engage with their new vocalist Howard Jones (‘When Darkness Falls’), as well as several deep cuts from label mates Spineshank, Chimaira, Slipknot, and Devil Driver, among others. Every single track on it hit hard and fast, leaving no room to breathe much like a good slasher movie should. Tracks by non Roadrunner artists like Sevendust, Mushroomhead, and Seether made for excellent inclusions as well, proving that this was way more than a Roadrunner sampler disc. 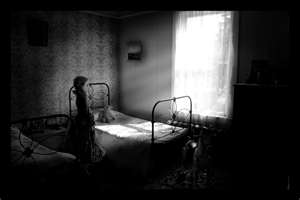 Alone In the Dark, released in 2005, was met with critical scrutiny and was universally panned by not just critics, but also fans of the video game it was supposed to based on. The soundtrack was a hefty one, featuring, not one but two discs, with 37 tracks. Pretty freaking huge huh? However, with that much music to take in and absorb, it left listeners feeling overwhelmed, and the sequencing on the album was…for lack of a better term crappy. Like the Hills Have Eyes 2 disc, the album features all previously released tunes that had no bearing or actual representation in the film itself. Dillinger Escape Plan is featured again, as well as Shadows Fall, but also included are Mastodon, Death Angel, Arch Enemy, Meshuggah, Soilwork, Machine Head and the like. The problem is that none of the songs featured on the soundtrack had anything to do with the film and it felt like a compilation album shipped out to buyers from a catalog (not to the mention a head scratching inclusion from Moby)

Before the Twilight series trivialized vampires and their endless feud with the Lychans (ie Werewolfs), there was a film series featuring the very sexy Kate Beckinsale called Underworld, and its soundtrack matched the stylized Gothic overtones of the film perfectly. Produced by Danny Lohner (Nine Inch Nails, Marilyn Manson, A Perfect Circle), the album contained several songs that were written either specifically for or were remixed by the producer just for its release, as well as featuring supergroups (The Damning Well, David Bowie feat. Maynard James Keenan and John Frusciante, and the first released contributions from Puscifer) formed specifically for the albums tracks. Another notable inclusion is the first original song to feature a then new Greg Puciato on vocals for the Dillinger Escape Plan (they sure do show up on a lot of these soundtracks). The track order was near perfect as well, giving you the highs and lows as it flowed seamlessly from song to song. Released in 2003, one could argue that this set the standard for what a vampire movie soundtrack should include, dark, noisy, and industrial strength tunes that showcase the Gothic overtones associated with the genre and it followers. 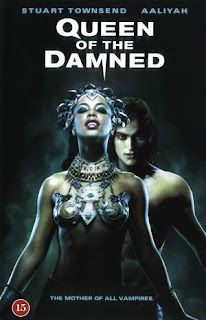 Another vampire flick, The Queen of the Damned starred the now deceased Aaliyah, based on the book of the same name by Atheist, and once born again Christian Anne Rice, proved once again that singers shouldn’t try to act. Crap, cliche, and crap oozed out of ever pore from this overzealous movie, but what about the soundtrack? Featuring original compositions written by Korn front man Jonathan Davis, who was supposed to actually perform the songs but due to record label issues was unable to, the soundtrack was different in that it included a who's who of nu-metal vocalists singing over the compositions (David Draiman from Disturbed, Chester Bennington from Linkin Park, Wayne Static of Static-X, Mariyln Manson, and Jay Gordon of Orgy respectively) as well as Deftones contributing Change (In the House of Flys), which seems to be the only song they’ll agreed to put on a soundtrack [edit note, they have released songs on the Crow City of Angels soundtrack, and have appeared on others as well). Interestingly enough, other artists who were apparently approached to appear on the disc included Tool, System of a Down, and even Aaliyah, but were either not interested or turned down. The album was promoted heavily with the use of the Static-X song Cold, featuring a music video that tied in with the movie.

This is obviously just a brief overview, other notable horror movie soundtracks to include metal that were kept off of this blog for certain reasons, but should still not be discounted include the Saw movie soundtracks, as well as the Resident Evils films, among others. Happy Halloween, and be sure to check the candy bar wrappers for punctures and at all costs avoid eating caramel apples.

(Written by Grant Peter)
Posted by T.Church at 10/30/2011
Email ThisBlogThis!Share to TwitterShare to FacebookShare to Pinterest