Bevis Frond: The Leaving of London 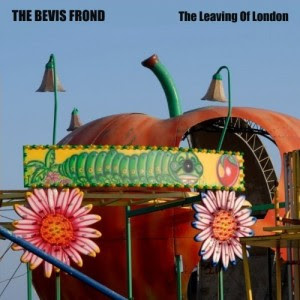 Yup. After a 7 year hiatus The Bevis Frond has come back and I honestly think the world is just a little bit better of a place to be because of it. Having had no new Bevis Frond releases since about 2004 I had been thinking that Nick Saloman had laid the band to rest. So the new soon to be released album 'The Leaving Of London' comes as one fantastic early Christmas present.

This album brings you a full band line up with Nick playing guitar, keyboards, and doing vocals, Paul Simmons from the Alchemysts and Scorched Earth on guitar, Long time Bevis veteran and ex- Hawkwind member Adrian Shaw on bass, and Dave Pearce from Psycho's Mum playing drums. How's that for pedigree.
What can I say about the new record. I could say "Hey this thing is awesome" but since all the brain dead grocery store shelf stockers own that word when describing their Avenge Sevenfold and Shine Down cds I ain't goin' there. And I don't think that I need to tell you that this thing is in a totally different class that stuff like that anyway do I? I mean comparing mediocrity like that with a record like this is....well, impossible. There's no comparison and I really shouldn't have even brought it up.
The music seeps into the cerebral cortex and permeates your consciousness like an alien presence that feels like a long lost friend. There are many layers of depth and introspection here. One of the things that I keep thinking about, the more I listen to this record is, just how criminally underrated Nick Saloman is as a songwriter. 'The Leaving Of London' is one great album. There's a degree of stark purity here that you are not likely to find anywhere else for quite some time. It's resensifying. So while the rest of the world worships at the alter of the mundane, you can follow a better path. Listen to my words here, Don't let this one get by you, you'll be sorry.
Posted by Shep at 10/09/2011
Email ThisBlogThis!Share to TwitterShare to FacebookShare to Pinterest