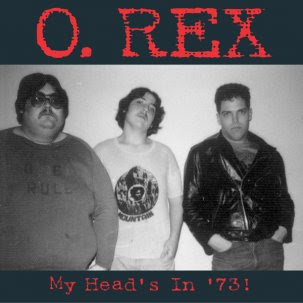 Anybody who knows me at all would be able to tell ya, if I come across a record with a title like this and has Ken Highland in the band (not to mention Eddie Flowers manning the drums on one session) then I'm gonna get this. And man am I glad I did, and am actually kicking myself for waiting so long to obtain it.

This 2 disk thing is pure primitive proto punk fun from the first track to the last. The band, consisting of Solomon Gruberger, Jay Gruberger, and Ken Highland respectively changing off from guitar, bass, drums, and vocals on various songs, also including Eddie Flowers and Ken Kaiser who did the drumming on occasion. The band eventually mutated into the Afrika Korps and Ken was involved in the mighty Gizmos so you know that the pedigree here is good.

From the first second I put this thing on the stereo I was hooked. That is not always the case with a lot of the stuff I hear. Sometimes it's not until the third or even fourth play before I figure out I like it, but this was instantaneous. The comp goes along chronologically so you can hear the guys go from complete sonic mess (which sounds good to my ears) to getting a little more chops as they go along. But not to worry, they keep the stuff primitive all the way, never losing the heart and attitude that makes all good rock and roll what it is.

The stuff on here was recorded in the Gruberger livivng room on a reel to reel tape machine, from the years '73,'74,'76 and at times the sound quality leaves a little to be desired but like all really great rock 'n' roll, it transcends such things and can even be enhanced by it. I've heard worse in regards to sound quality even so your not going to hear much complaining from me. This thing is more garage than a lot of '60's garage records and is as raw as a bunch of savages eating the meat from a bison while it's still grazing in the field. From the stupidly brilliant/brilliantly stupid teenbo takes of Velvet Underground inspiration to the paleolithic cops of The Ramones the good stuff just keeps coming. Rock 'n' roll in it's most basic and undiluted form. The question is, are you cool enough to handle it?
Posted by Shep at 5/22/2011
Email ThisBlogThis!Share to TwitterShare to FacebookShare to Pinterest