This week's Five Questions With... segment features the beautiful and seductive Zebra, a bass player temptress who has been involved with such acts as The Enemies, The Sleazaholics and Hot Damn!. I "met" her through a mutual friend on Facebook, Russell Quan who is the drummer for The Mummies. She had posted some amazing photos she had taken of the Mummies on his FB page, and after I commented on them she and I became friends.
As it turns out she has quite an extensive history in American rock and roll. She forged her own path from when she co-owned several independent record companies to later when she formed her bands, some of which are self proclaimed sleazy parodies... A rock and roll bridge if you will, that crosses that gap from the teenage male awkwardness to rock-hard, full-fledged manhood. In that aspect her band Hot Damn! has done more for male maturation than the Bangles, The Runaways, and the Go-Go's have combined. 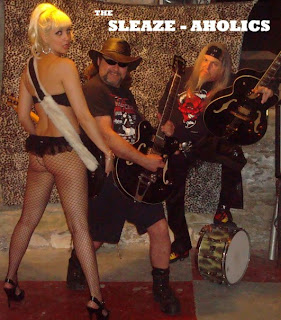 Not exactly what one might find sitting next to Teen Beat, Sports Illustrated and Woman's Day.
As much as a parody as some of her bands are, Zebra actually is somebody who is taken very seriously in the business of rock and roll. She has been a musical entrepreneur, forming independent record companies that didn't fit into the mainstream, but rather sat on the outer edge where the phrase "Sex, Drugs and Rock and Roll" got it's prominent coin. Her bands are still more or less together, and if you ask her real nicely, she might even come to play in your home town... This is her second appearance in the Bigfoot Diaries, her first coming way back in February. Obviously, as this blog's demographic is typically adult male, we hope for many more returns.
Without further adieu... Five Questions with... Zebra:
I got to be honest... I do not know much about you other than the fact that you play bass for a band called The Sleazaholics and you took some great photos of the Mummies... What would you like the Bigfoot Diaries readers to know about you?
I never really thought of what I want people to know about me. I've always kinda shied away from that subject because people always seem to have their own concept and opinion of me regardless whether it's true or false. They strongly believe that they really know me and what little they do know of me in their minds is always somehow all mixed up with so many strange illusions. So, I let it be. Outside of the music scene and what they do know of me, I've always kept to myself and somewhat private.
Tell me about that psychedelic photo of the Tell-Tale Hearts that was in People Magazine in 1985... Were you there for eye candy... Were you actually a part of the band? The photo looks like it could have been taken in 1969! 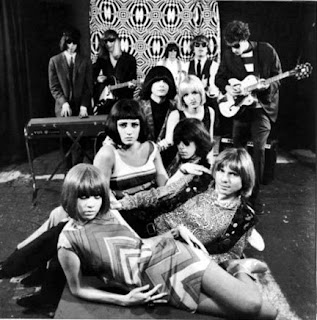 People Magazine photo shoot was actually taken at my roommate's and great friend Greg Shaw's Cavern Club in Hollywood, CA on Hollywood Blvd. The entrance was in an alley way and you had to climb up what seemed to the fire escape type metal stairs. Try dragging your shit up that flight of steps. Greg-ee-poo, is what I called him, is the second cat sitting behind me. Greg has passed away and for anyone who didn't know he was Bomp Records along with his ex wife Suzy Shaw. I was not just eye candy but co-owned my independent record company Dionysus Records, Hell Yeah Records, Romulan and Bacchus Archives. I guess It's now called the Dionysus Empire since I left. We were distributed by Mordam REcords at the time (also distributed Jello Biafra's Alternative Tentacles and Long Gone John's Sympathy Records) to name a few. I have always been part of the LA scene for many years and put out many records from sixties garage punk to punk rock and rockabilly.
How did the stage name Zebra come about?


Zebra has been my nickname longer than my real name. Everybody knows me by Zebra. Name was given to me by one of my sisters named Margie. Can you believe there are four us girls? My poor dad!


Sex drugs and rock and roll are listed as your influences... I see the sexual connotation in your style, but what is/was your drug of choice, and who would you say is your main influence as a bass player?


Yeah, sex has kinda been the whole being of all the bands I've been in. The music was somewhat humorous and I didn't take it too seriously. Rock n Roll is in my blood and for the drugs... My main influence in playing bass is Bill Wyman of the Rolling Stones and of course Lee Joseph, my ex and head cheese of the Dionysus Empire. He can play bass like nobody's business.


Is there any chance that Hot Damn! will tour again, and if so will you be coming through Iowa?


As for Hot Damn! touring again... it's bound to happen. So look out Iowa your ass is next!


(Bonus Question): What is the last book you read?

Last Book I read...usually I read two at a time is "Azucar!" bio on Cuban singer Celia Cruz by Eduardo Marceles and "Spear of Destiny" almost done with it by Trevor Ravenscroft.


Thank you Zebra... The Bigfoot Diaries sincerely appreciates your candid participation with this interview. We really do hope to see you on the road soon!


*UPDATE: Upon completion of this post I got a message from Zebra who made a clarification: Hey man! That was way cool of you! Thank you! The only thing I saw that is not happening anymore is the Sleazeaholics. Hot Damn! is the only band I'm still in. You have a cool thing going on! Great Job!!!!
Posted by T.Church at 7/14/2010
Email ThisBlogThis!Share to TwitterShare to FacebookShare to Pinterest