One of the most unique things about the Des Moines music scene is the fact that, as it happens, it is being chronicled into an endless file of captured audio, live video footage, and amazing photography. This is due to a project started and shared by Greg Waldrop and Jeff Anderson, an entity known as Dangerous Music Inc. 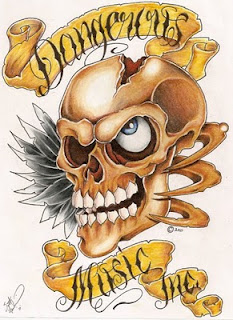 By the virtue of a shared love of live music, these two routinely spend countless hours every single week collecting and processing media from local shows. Then they pour over it, making edits and adjustments until it meets a strict standard of quality. This takes alot of time because usually the video footage comes from a different source than that of of the audio. And many times there are two or more cameras to sync together with the audio, making it even more tedious and time consuming.

Only after this process is complete is it turned over to the bands that are being featured, to use for their own promotional purposes. It's a pretty good deal for the bands... Most of the hours that Greg and Jeff pour into this project are volunteer. Usually they don't charge a dime.

DMI. has become a vital cog to the music scene in Des Moines, and the work they do and the hours they put in are a true testament to their dedication. Local music wouldn't be the same without their hard work... Nor would it be as widely accessible. There is nobody else taking on the workload that Greg and Jeff are in regards to capturing local music. And to be featured on their Youtube page (where most live footage ends up eventually) is a rite of passage for local bands who are working hard to become better musicians and promoters of themselves. It's a win-win. The bands work hard, and the reward is that DMI chooses to spend time with them to help them better their portfolio. The audio captured, the video footage and the photographs are routinely used as tools on the bands' Reverb Nation pages, or in other promotional media. It's a very friendly situation, and one that is unique not just to Des Moines but to local music scenes everywhere.

DMI.'s latest project has been to film an "official" video for the metal band Caustic Vision. It features the song "Fake," which is a favorite amongst the Caustic Vision die-hards who flock to see them. It's a good example of how the audio is synced with video footage, which in this case is a combination of live performance and artificial posturing. What you can't tell by watching the video is that it was a cold windy day when the outdoor footage was shot.


"It was a chilly 30 degrees during the filming and I think the only ones complaining were us," said singer Mickie Witcraft. "But seriously, the whole thing was a great experience and we will always do business with DMI. Greg is the man and always does us right."

There is so much talent in the Des Moines music scene and we are very fortunate to have Dangerous Music Inc. doing what they are doing. In a lot of ways the scene is still in a stage of infancy, especially in terms of attendance, but with the dedication and the perseverance that Greg and Jeff bring, interest and awareness will only grow. And of course the scene is better because of it.


Posted by T.Church at 1/30/2012
Email ThisBlogThis!Share to TwitterShare to FacebookShare to Pinterest