THE STOOGES - HAVE SOME FUN: LIVE AT UNGANO'S (ELEKTRA / RHINO) 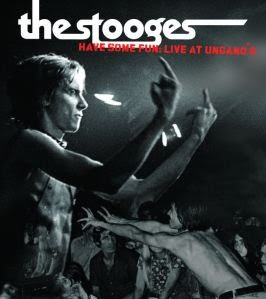 It seems that in recent years it has became kinda fashionable to like the Stooges. In some ways I find this to be a rather sad kind of a thing, I mean any witless dumb ass can follow fashion. On the other hand it takes true character to grasp style, soul, and energy, all things that fashion attempts to eliminate in order to achieve the herd like, conformist, mind warp that the powers that be seem to love so well. (Don't go thinking fer yourself punk, we'll tell you what's cool, and you can buy it all at Hot Topic).
However, curmudgeon that I am, I'm going to look at the positive side of things. Since the Stooges stock seems to be rising in more circles, we are starting to see some pretty nifty archival digs starting to see the light of day. Where the Raw Power era of the band has been somewhat out there and not too hard to find, stuff from earlier incarnations have been much harder to come across. That seems to be changing, even if the tiniest little bit,and I have to say that it fills my ever lovin' heart with joy. Lesser mortals would soil themselves if they were truly capable of grasping the impact of such things, but those losers have the latest season of American Idol to keep them sedated.
Well anyway, the artifact that's got me all riled up is this recording of the band doing their thing live at a place called Ungano's. You get the boys ripping through a set of tunes from Funhouse, which is an excellent, if not the ultimate slab of street thug rock 'n' roll filtered through free jazz skronk that exists on this planet.
The Stooges start playing and the energy and intensity is in the red. What else would you expect from these guys, a band that give you psychotic frenzy, troglodyte skull thump, and over mind alien intelligence all rolled up in one tasty enchilada. Ron Asheton's guitar moves from bone crushing stomp to phantom like tones that creep into the dark recesses of your brain. His brother Scott brings on the glorious smash as he beats his drum kit to death, and Steve Mackay blowing the sax making some of the best nerve disintegrating blare this side of a Benzedrine crazed John Coletrane. Bill Cheatham on second guitar holds the rhythm down while Zeke Zettner, replacing the recently departed Dave Alexander, cranks out some nice down and dirty bass riffs. And lest we forget the master of ceremonies Iggy singing, slithering, and spazzing as only he can.
The packaging is cool as well giving, with Lenny Kaye doing the liner notes on the back side of a poster that has Iggy throwing a two fisted middle finger salute to the crowd. Nowadays that's somewhat cliched, but back in 1970 such an act carried a little more weight, specially when you consider that the Stooges sometimes had an adversarial, if not outright hostile and combative relationship their audiences. As well you get a couple of pix of Ig ad a repo of a newspaper ad for Ungano's.
And now we come to the issue that is often the festering boil on the butt of many Stooges live recordings. The sound quality. A number of Stooges stuff sounds like it's been recorded by a portable tape machine that's stuck in the trunk of a car in the venue's parking lot. The sound quality on this thing is nor great by any means but it isn't as bad as some of what we've been subjected to before on previous outings.

The sound is distant, and yeah, the energy of the thing suffers somewhat for it, but it isn't the worst. If you play the thing loud (duh) and let yourself sink into the sound, you're in for a cool experience. I'd have likely gotten this if the sound quality was half as good, but that's me.

Like Jade Hubertz once wrote me when I was asking about some Stooges disk he was selling, Of course it's good, it's the Stooges!
Posted by Shep at 3/06/2011
Email ThisBlogThis!Share to TwitterShare to FacebookShare to Pinterest