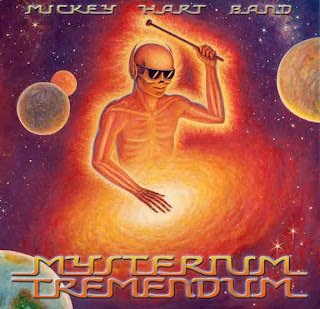 Perhaps the karmic talisman of the Grateful Dead family, Mickey Hart has spent decades in front of the gong. It was only after he joined The Dead in September of '67 did the band take that inevitable leap from blues rock to something a bit more encapsulating. He was a kick in the pants so to speak - because of the mass quantities of psychedelics that they were taking at the time, the band and their music had become very laid back. When he joined the Dead, Mickey Hart created a spark that initiated an entirely different sound and led the band  on a new direction to follow.

In his book, Living With The Dead, former band manager Rock Skully describes Mickey's infusion into the Grateful Dead as an instantaneous event..

...Suddenly in roars a B-52 in the person of Mickey Hart. And Mickey turns out to be the shot in the arm we so desperately need. He has that New York energy, a driving force that lights a fuse under us. He's a "different drummer," all right. It is strange, given the drive differential, that he gets along so swimmingly with the band. Soon Mickey and Billy Kreutzman are the tightest of buddies. Their styles of playing are way different -- Kreutzman's more fluid -- but Kreutzman loves that... He writes.

The two drummers DO have very different styles. Kreutzman has the jazzy - swing elements going while Hart takes a more militaristic approach to his craft. He was already a black belt in karate when he joined the band, and there is a lot of discipline that comes with that. Plus his father was a champion rudimentary drummer, so the lineage was also set. Perhaps only in a band such as the Grateful Dead could these two styles fit together and somehow form one cohesive sound. For whatever reason, it worked from day one, and it's energy has never relented. After sharing decades together on a stage, one can imagine the cosmic lift that these two have experienced.

Mickey isn't anything if he isn't a spiritual person. When he recorded Rolling Thunder in 1972 as a solo album, it was named in homage to a dear friend of the same name. Rolling Thunder was a Shoshone medicine man, a shaman and a teacher who had befriended the Grateful Dead while they lived in the Haight-Ashbury district of San Francisco. He made great impressions on Mickey, not only in how he (Mickey) sees this world, but also the directions of travel he takes in terms of metaphysical sound. While honing his craft as a drummer, Mickey incorporated these taught elements into his style creating not just sonance, but an incorporeal expedition. From his experiences with Rolling Thunder and other spiritual entities throughout his life, he has become a master of his craft in every sense of the word.

His latest album Mysterium Tremendum reflects this perfectly. It's more of a voyage than anything, perhaps, a reflection of years and years of searching for the Earth's rhythm and it's correlation within the universe. He seemingly has found it, and has majestically wrapped it inside a box of song. It's not an easy thing to accomplish, and while listening to Mysterium Tremendum, I began to realize that there was much more happening than what was meeting the ears.

Each track on the album tells two stories, one sonically, and the other in verse. The catchy "Slow Joe Rain" has all the elements we've come to know about Robert Hunter's penned lyrics from the territorial introduction (I'm Slow Joe Rain from Lake Champlain)  to it's catchy hook phrase. It comes around again and again, setting up a lyrical cadence so evident that eventually the human body craves it like salt and sugar. Mickey, realizing this subtle subliminal action, builds his own rhythm around the human cadence, swirling it all together like a rotating galaxy. The music incorporates both rhythms and tightly winds it down  a path of its own.

Simply put, "Slow Joe Rain" and several other songs on the album are written in a style that might lead an unsuspecting ear to not hear exactly what is happening. One won't realize that he is hearing the heartbeat of the Earth, or the sound of solar winds, the orbit of the planets, or the hushed tones of microwave background radiation. As a connoisseur society, we are trained to look at things on the surface only, without giving much thought to an underlining significance. THAT notion is the polar opposite of what Mickey Hart's Mysterium Tremendum represents, and for those who are ready to experience sonic visualisation, it's a helluva place to start.

On Mickey Hart's website he begs the following questions: What is life? Why is life?

He goes on to say that, the answer is in the rhythm in things. The way things move, sound and look together. We are constantly moving from chaos to order and back and forth. We pulse, we spin, we expand, and we contract.

Mysterium Tremendum is a broad example of that.

In the song "Who Stole the Show," we are treated to the lyrics and vocals of  Sikiru Adepoju, a Nigerian master of the Talking Drum. He and Mickey trade off lyrical barbs, Adepoju in his native language, and Mickey corresponding in English. It's an interesting mixture of music from two different sides of the world. Adepoju has worked with Mickey Hart on many of his former projects and it's evident in their communication. Adepoju's accent in contrast to the smooth but torrential music behind it makes for easy listening. It's a nice break from the other tracks on the record. It's something new.

It's a nice touch that Robert Hunter was tabbed for most of the lyrics on this record. His is a prose that needs to be fired and refired. The man is a walking book of stories, and in a cosmopolitan worldly way, his words fit in nicely with the earthy sounds surrounding them. Mysterium Tremendum is world music taken to a higher plane, with incorporations of rock, jazz, psychedelia, and even slivered hints of rap.

The words to "Djinn Djinn" were written by Mickey, and like Hunter's words they seem to work well through the music. It's a bit of surprise that he is capable of writing such formidable lyrics, but that only comes from knowing that he is first a drummer. Maybe it should be no surprise at all in light of the greatness he has surrounded himself with over the years. The song's chorus has a catchy hook to it:

Mickey's band consists of a who's who from the world stage. He is joined by Crystal Monee Hall on vocals,  along with singer Tim Hockenberry, Dave Schools of Widespread Panic fame on bass, Gawain Mathews on guitar and effects, Sikiru Adepoju on drums and vocals, another drummer is Ian Herman, and finally there's Ben Yonas who lends his engineering talents and keyboard expertise. The Mickey Hart Band is touring, and will probably be playing a show near you. For those who are local, he will play The Englert Theater in Iowa City on August 22nd.

Inside the Mysterium we are led down a path of tremendous experience. Our natural pulse walks instep with the beat of the universe, glossed in beautiful and unsuspecting meaning. It's subtle, yet steadfast. It's invisible yet bright. It's there for the taking, please help yourself. It's a world of music at your fingertips.

Posted by T.Church at 6/08/2012
Email ThisBlogThis!Share to TwitterShare to FacebookShare to Pinterest