Interview with Dave Deibler of HOLS

Even before I turned twenty-one, I had an agenda. As soon as I was old enough to legally step foot in a bar, I was going to drive as far as it took to to check out the band that everybody was talking about at that time, House of Large Sizes.

Cassette tapes were still all the rage in 1989. I think CDs had been invented by this time, but they weren't in large circulation. Most local studios found it easier and less expensive to put a band's music on the cassette format as opposed to the compact disc, and most bands were prone to hand out demos to the people who showed up for their shows. I'm not sure if that's how he actually was able to obtain it, but my friend Mark had a copy of the House of Large Sizes 1986 EP on cassette, simply titled, House of Large Sizes.

We would spend hours together cruising in his Chevy Cavalier listening to this tape over and over... Getting lost on back roads, Cruising midnight highways... I was only about 20 years old, but I knew that as soon as I was old enough, I was going to find a bar that HOLS was playing in and see them live.

Shortly after I turned twenty-one in March of 1989, HOLS was scheduled to play at Gabe's in Iowa City. Living a mere 90 miles to the west, in Newton, Iowa I thought nothing of jumping into Mark's beat up Chevy and heading east. It should have been a very memorable trip, but honestly, I have very little recollection of how that night went down. I know that having just turned twenty one and being new to the bar scene that the whiskey was tasting especially wonderful... And I do remember sweating profusely in the upstairs of Gabe's stomping around and slam dancing (what we called it before the word "moshing" was invented). But I am a bit fuzzy on any specifics after that, and I honestly couldn't even tell you if we ended up staying Iowa City that night or if we miraculously made it home...

I've always been a fan of House, but sadly, have never owned any of their music. I would hear them from time to time on the college radio station KUNI, or maybe through a friends cassette boom box, (In particular my pal Robb was, and still is a huge fan) and I always had the respect for what they were doing and the music that they played. The band is made up of husband and wife duo Dave Deibler and Barb Schlif, and Brent Hanson. They are still writing songs and even play live once in awhile when the urge is there. MTV's first movie production, Joe's Apartment featured a main character (Jerry O'Connell) who wore a House of Large Sizes T-shirt. Years later, the same tee was seen in an episode of Drew Carey. The band has been awarded a star that was put on the building at First Avenue & 7th Street Entry in Minneapolis, and has continued to keep a strong following despite the fact that they have only played a handful of gigs in the past few years.


I caught up with Mr. Deibler through email, and was able to ask him a few questions which he graciously answered.

Please tell me about HOLS in it's infantile stages... How the band was formed... Your first gig, etc?

UNI students. Very small musical community in Cedar Falls. Dave Berg and I had a class together. I considered him to be in the band before I actually asked him!

Were you married to Barb before the band started, or did you form a band together, fall in love, and then get married?

Barb and I went out before HOLS, married in '90, so 4 years after the band started.

What term would you use to describe HOLS?

While you and Barb have been solid members throughout the entire life of HOLS, you have gone through what... 4 drummers? Why do you feel that the drum stool been such a hot seat in your band?

What record are you most proud of releasing, and why?

Hmmm. Probably "One Big Cake". The first one is always the sweetest. 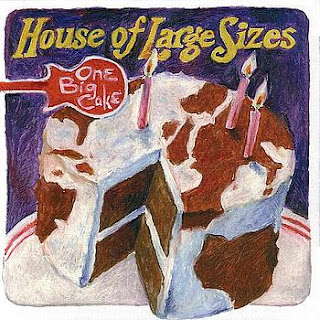 What was a major defining moment of your tenure with HOLS... Do you have one single memory that sticks out as your favorite?

Lots, really. Probably playing and doing well at 7th St. in Minneapolis. Getting a star on the side of the building. I use to live there and saw the Replacements and a million other killer shows. That meant a lot to me. Playing with and hanging out (a bit) with heap Trick was fun. Meeting and working with Joe Carducci and getting to hear some cool Minutemen stories was also great.

It's not easy being a travelling rock and roll band... What are some of the most memorable hardships you endured while on the road?

Being broke on a long drawn out under promoted tour can really separate the men from the boys. I've been both.

What's the story behind HOLS and the movie, Joe's Apartment?

The prop department called me and asked for some shirts. I sent them. Only regret is that I should have made them pay for them. Same tee is in the Drew Carey show.

What are you doing these days musically? In general?


Is there any chance that HOLS will ever reform and do another tour?

HOLS will probably get together every couple of years for a while. Tour? No. It's all for fun now. No financial requirements attached.

Ok just for fun... Do you have any "guilty pleasures" in your CD collection?

I don't make that separation. I am a huge AC/DC fan. A lot of people would consider that "guilty" I think. I have a pathological love for the drummer. Currently I am obsessed with Grinderman and PJ Harvey. I don't trust people who don't have a few "skeletons" in their CD collection. If you only listen to music that Pitchfork recommends I think your missing the point.

Hypothetically speaking, you have a son who is turning 16 tomorrow and for his birthday, he wants you to buy him a record that will change the way that he thinks about music forever... What is the ONE record you would buy for him?

I wouldn't. I'd let him pick it out. I run into a lot of kids who are living out their parent's musical tastes. Fuck that. Really. There is so much great music being made right now. My hope is for my son to have a passion about whatever he decides is his "thing", you know? Live by example. That's what kids, I think, really respond to. Want your child to appreciate music? Listen to it. Enjoy it. Play it.
Posted by T.Church at 9/07/2011
Email ThisBlogThis!Share to TwitterShare to FacebookShare to Pinterest

Ahhhhh...so many memories of House shows! Thanks for the iniative and efforts on this piece Troy. Growing up so close to CF and being around that college town seen really influenced me. At the time of discovery, I don't know which band grabbed me first, House of Large Sizes or Fat Bertha and the Love Shakers. Thanks again Troychurch... the rumor is they are playing a set sometime in December, so keep your eyes peeled if you want to see the best power trio from Iowa!
- Robby

Been to hundreds of shows and HOLS is my favorite live band ever!