She had me in her web, and I was as helpless as a fly. Whenever I saw her I had that preteen sense of euphoric anxiety. Maybe I was yet too young to know why I liked her, but I knew that I did... And despite my best intentions, I could never bring myself to tell her how I felt. Instead, I would follow her around the hall ways of junior high like a puppy. She might just as well had me on a leash because I knew her class schedule as well as my own, and I would follow 10 feet behind her to each of her classes. Sometime I would even get out of my class with a bogus bathroom hall pass just to walk by the doorway of the room she was sitting in. If I was lucky, she would be sitting close to the door and I would see her... Sometimes I would walk past the door three or four times just to make eye contact with her, then quickly glance away. I was overcome with nerdy shyness. It was pathetic, looking back on it...
And then it happened all over again, just the other day.

I was in a video game store in Des Moines looking for the original Mario Bros. game for my Nintendo 64. I wasn't having any luck, as apparently modern video game stores have deemed the 64 console obsolete. I walked up to the counter to inquire why such a kick-ass game system didn't get the respect it deserved when I came face to face with a real life MIDGET. Suddenly I had that feeling of euphoric anxiety that I had  in the 7th grade all over again. 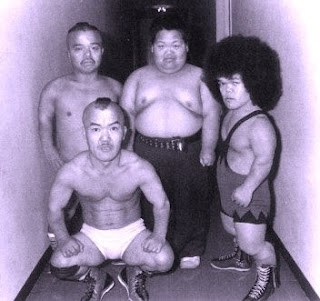 It's true. I have always wanted an entourage of little dudes hanging around, following me into bars, restaurants and shops. I wanted to be that guy that entered a party with a handful of midgets in accompaniment, and I have wanted to be that guy since I was a little, when I watched 10 midgets wrestle Andre the Giant in the most shenanigan-filled wrestling match in the history of television. That was long before Kid Rock had his midget pal and way before Jonnie Knoxville introduced us to the psycho aggressive Wee-Man. Had I played my cards right earlier in life, I might have brought this to fruition... But...

So here I was in the video game store just 3 feet away from this little guy and I couldn't form a sentence. I was caught entirely off guard and words can't describe the scary pressure that took over my thought process. This little dude was wearing a Slayer tee, ripped up jeans and high top tennis shoes. He had long wavy blonde hair, just on the cool side of a mullet. In other words, this little fella was the Holy Grail of the midget kingdom. He knew it and I knew it and I was speechless.
"Hey man, what's up?" he casually said to me as he filed video games into a sliding drawer.

"Not much there little whipper snapper... Just kickin' it old school... We should totally become besties and go listen to some speed metal or something..." is what I wanted to say,  but all I could manage was "N-n-not much. Just looking."

"Cool man, if I can help you just let me know!"

I turned around and went across the store pretending to take another look for games that fit my console, knowing damn well that there was nothing even close to a Nintendo 64 item in the entire place. I stood behind a rack of PlayStation 2 games and peeked back to the counter. Little dude was still filing merchandise. There were a few other people in the store and I couldn't shake the anxiety that was building within me. One part of me wanted to approach him again, this time with a with a sense of coolness, but the other part of me which seemed to be stronger just didn't allow me the courage to do so.

To make a long story short, I stood behind that rack for about 5-10 minutes before I just decided to leave the store. Little dude took me completely by surprise and had me in his web. I couldn't summon the guts to approach him, or even the words to say. I mean how do you approach a midget under the guise of just hanging out. It's not like I was out to exploit him or anything, just to hang out with him and expect him to want to always be by my side no matter what, and hope that he had some midget friends that would join us... It's hard to find words for that.

Knowing where he works I look forward to going there again someday, this time with a headfull of courage and the right words to say. Meanwhile if anyone knows where to find a working version of the Nintendo 64 Mario Bros., give me a shout... And if you know a midget or two give me a call.
Posted by T.Church at 6/28/2010
Email ThisBlogThis!Share to TwitterShare to FacebookShare to Pinterest

One of the most original, candidly exquisite slices of journalism I've had the pleasure of reading.

Hi there, Troy! Just wanted to say that this black ink on dark blue background is very hard to read. You might look at it and see what you think. Otherwise, I think this new layout is cool! I like it and am looking forward to coming editions! Keep on Keepin' on! Peace and Love