ROCKET FROM THE TOMBS- THE DAY THE EARTH MET... (SMOG VEIL RECORDS) 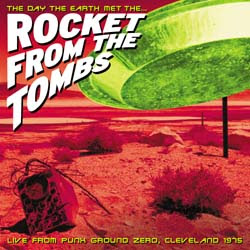 Ok everybody, gather 'round cause it's time to talk about a classic. Unknown and unheard of by many true, but this thing is a pure classic just the same. Yeah, I know some of you wanna hear about the new, the recent, and the up 'n' coming. Well there's plenty of time fer that, but it ain't just about spewing wordage on the stuff that's new, it's about putting stuff front and center that has not been shouted about from the rooftops.(Or at least not shouted about enough). What we're about here is putting out the gospel of rock 'n' roll, be it new, old, or extra-dimensional.

What we're are talking about right now is truly an object of power. A focal point of such extreme cosmic energy it could only be wielded by those in touch with the primordial fire. This is the sound of the Ubermensch. Don't believe me. Well it's out there to be had and heard, or rather felt and experienced. All you have to do adventurer, is pull the sword from the stone. The stuff on this record comes from 1975, a collection of rehearsals and live stuff from a band who were destined to be heavy hitters if maybe they only could have made a record. Listen, this band is as vital as any you care to mention. as vital as The Stooges? Yep. The Velvet Underground? Uh-huh. The New York Dolls? Absolutely. Dictators, Black Sabbath, Blue Cheer, Led Zep,whoever you wanna name, these guys could stand toe to toe with 'em.

This is the real deal folks. Heavy metal filtered through punk and powered with all the thunder and blast of the Norse pantheon of gods. Heavy metal in the sense of what that term used to mean: Loud, hard and heavy music that was fun to play and to listen to. Back when it meant blazing and raging sound, before the term was pilfered, over processed, co-opted, sanitized, and neutered to the point where a simpering man-puss like Bret Michaels could be considered a rock n roller; and a bunch of whiny pussies are the new purveyors of heavy music; all so it can be sold to the lowest common denominator, because that's how all those soulless zombies with their marketing degrees that have taken it all over roll. Every song on here is a winner. From the first second that you start playing this thing it grabs you. You hear the riffs and you feel it. Like all really great rock 'n' roll, this thing awakens the paleolithic man inside. I think Julian Cope, when talking about their song "What Love Is", said something about Viking warfare. Yeah, but I would say pretty much their entire approach to making music was Viking warfare.

The dual guitar attack of Peter Laughner and Gene O' Conner is as thick and pounding as a brick building falling on your back and as searing as a face full of hot grease. Dave Thomas' (aka Crocus Behemoth) vocals are as intense and urgent as a city block burning to the ground. Craig Bell on bass and vocals and Johnny Blitz round out this line up of the band. Rocket From The Tombs had several incarnations (even a comedy version I've heard) until they finally splintered off into both Pere Ubu and The Dead Boys. Some of the songs made famous(?) by those bands can be heard here in early incarnations, stuff like "Sonic Reducer" "30 Seconds Over Tokyo" "Final Solution" and others. There's also covers of The Stooges and Velvets among this collection of songs. This is definitely a weapon that you need in your arsenal the next time you need to rage against the powers. Seriously, if you can't pick up what these guys are laying down, then you deserve commercial rock radio.
Posted by Shep at 2/14/2012
Email ThisBlogThis!Share to TwitterShare to FacebookShare to Pinterest