Grant's Tomb: Yeah! Bring It On!

There has been a lot of discussion involving Limp Bizkit on the interwebs as of late. You see, it seems the band everyone loves to hate has just inked a deal with Cash Money Records, most notable for acts like Lil’Wayne and Nikki Minaj.
Shocking move? Oh yeah, considering the LB was dropped from their long time label Interscope (where frontman Fred Durst also happened to be an A and R rep-no word on whether or not he is still holding that job) unceremoniously last summer reportedly due to the fact that their most recent (come-back) album “Gold Cobra” failed to sell over the 75K mark. In all reality, if it were any other band, selling 75,000 copies of your record in this day and age would be quite the accomplishment, but Interscope must have had higher expectations; that or Fred did something to piss them off. We’ll just speculate here and go with the first.

Let’s back up here for a hot minute; you might be asking yourself “Limp Bizkit released an album last summer? Like 2011 summer? What? Why?” If you find yourself pondering these thoughts you are certainly not alone, but alas it is true, and as seems to be the case every time the LB is mentioned there is some kind of backlash that follows. Seriously, if you like trolling as much as I do on Facebook/Twitter(I do not twatter)/comment sections in blogs, go out there and say something nice about Fred Durst and crew and I promise you everything from your grandmothers sexuality to the food you eat will be attacked. There is this vehement hate for this band that is so ridiculous it almost can’t be justified. Although to give the haters some credit, most will admit they have no problem with the rhythm section of the band, other than the fact that they still play with Fred Durst.

So, considering all of this, why does this band or more importantly, why does Fred Durst continue to make music under the Limp Bizkit moniker? His lyrics are childish and sophomoric at best, no freaking way anybody takes him seriously? The answer is actually quite simple: Fred Durst likes the attention. We’ve all heard that even negative press is good press because it’s getting your name out there and it’s getting people to talk about you and the product you’re selling. If my assumption is true, this could very well make Fred Durst the biggest troll this planet has ever seen and you all fell for it. Or maybe he is just a sociopath, but for arguments sake, let us just pretend it’s the first.

For a guy who went around calling himself  “The Chocolate Starfish,” he’s made a butt load of cash and he’s also not afraid to brag about it. The bands first record “Three Dollar Bills Ya’ll” has been certified 2x platinum, their sophomore release “Significant Other” hit 7x, and “Chocolate Starfish…” hit 6x platinum, and that’s just in the Unites States folks. Hell, even that album they made with former Snot guitarist Mike Smith went platinum and the extended play they released in 2005, that got zero promotion at Durst’s insistence still sold over a million worldwide.

Now believe me, I’m not trying to argue the legitimacy of an artists work solely based off of album sales, if that was the case Kanye West would be this generations Picasso, but pay attention here: someone out there is buying this stuff.

Fred Durst is no stranger to controversy, the Woodstock incident alone (during the bands set at Woodstock in 1999, several violent incidents were reported, including rape and assault) as well as what happened in Australia (during the 2001 Big Day out festival a teenager died due to suffocating because she was pushed up against the barricade), both events had Durst thrust into the forefront of the media attention. His response to Woodstock as that “I didn’t see anybody get hurt,” even though live audio of the event clearly stated otherwise. “People are getting hurt." He is taped saying to the crowd, "Don't let anybody get hurt. But I don't think you should mellow out. That's what Alanis Morissette had you motherfuckers do. If someone falls, pick 'em up. We already let the negative energy out. Now we wanna let out the positive energy".

Possibly one of the most controversial things Durst and Limp Bizkit have done actually involved no one getting hurt: During the summer of 2000, Limp Bizkit went on a free tour sponsored solely by Napster. Yup, you read that right, the file sharing program was endorsed by the man himself. 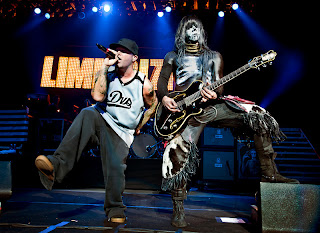 Couple that with the multiple feuds the LB mainman has had with other artists in the musical sphere (D12, Taproot, System of a Down, Zakk Wylde, Brittney Spears-claimed they were dating, Christina Aguilera-claimed he got nookie, etc.), it makes my assertion all that much more true. Negative press is good press, even Les Claypool said it about Durst.

Now, keeping all of this in mind, recent comments from him (in an interview with ‘Poolside with Dean Delray') like “One of the things with “Gold Cobra” was that that was a record, for us, to do for ourselves. It wasn’t our step forward to make a big pop, smash radio record and finally we have been able to get off our record label and become independent…”

Really? Independent? You’re joking? I’m sorry, that was my brain literally farting out the questions there. I mean, he can’t be serious right? They just signed a deal with CASH MONEY RECORDS! In all reality, Fred Durst could easily put out his bands albums/releases independently, he has the connections, but when you take his recent actions into consideration, there is just no way you can believe what he said in the above quote. Wait a minute…he didn’t…oh crap, I just got trolled by the master.

To say that Fred Durst is insane is an understatement, but the line between insanity and genius is fine at best. So here’s to you Freddy D, may you continue to befuddle and piss off the masses while creating the (f)art you are so good at.

Posted by T.Church at 2/27/2012
Email ThisBlogThis!Share to TwitterShare to FacebookShare to Pinterest