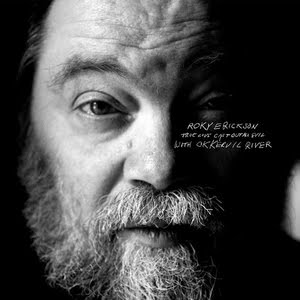 I picked this up in April when it first came out and it has not been far away from my stereo since. When I first heard that Roky was working on a new record I was happy to hear the news on one hand, and then a little worried on the other. I mean how many times has an old favorite come out with something new after a lengthy hiatus and you wish they never bothered. Thus, the time waiting for the new record is often filled with as much apprehension as anticipation. Will it be a disappointment? Will they still have it in them? All these questions were rambling around in my head as I waited for the release date to come.

Well I shouldn't have worried, because what we've got here is a real solid record. The songs on here were written by Roky at different times and stages of his life, and the result is basically Roky's autobiography, and for those who know the story, what a tale it is!

Now if your expecting the "horror rock" like his stuff with the Aliens, Evil Hook Wildlife E.T., or some of the others, you won't find it here. What you will find though; is a record with a ragged purity and resilient spirit that can only come from someone who has weathered the worst of storms and come out the other end, Maybe battered and beaten, but still standing and possessing a kind of insight that only comes at a high cost.

Buy this record, or cd, or whatever. Don't burn it from a friends copy, don't get from some free download, but buy it. I would like to live in a world where Roky Erickson gets some money for his efforts and turds like Lady GAGA have to struggle to pay the bills. -SHEP
Posted by T.Church at 2/24/2011
Email ThisBlogThis!Share to TwitterShare to FacebookShare to Pinterest