Miss Wendy at the House of Bricks


The Fabulous Miss Wendy finally made her return to the House of Bricks last Thursday night. To my surprise, and probably to Wendy's dismay, the place was virtually empty except for a few hardcore music fans.

I was under the impression that Miss Wendy was HUGE in Des Moines... So when I looked around during the show and saw so much wide open space, I began to wonder what happened... Promoting these concerts is a hit and miss venture, I am aware of that. And while I only have the power of the written word, I feel an obligation to Aron and Chad at Skyline Audio and Metro Concerts Live to promote the hell out of these productions... And why not? It's all in the name of supporting live and local music. When you do not show up, I feel partly responsible.


But alas... You missed a doozy of a show and a great night at the House of Bricks.

Wendy was once dubbed the "Female Jimi Hendrix." While that might be a bit of a stretch, nobody can argue that her show isn't entertaining. The fire and passion she puts into her show, and her ability to talk the rock and rock the talk sets her apart from most of her contemporaries. She is absolutely at one with the guitar - Like Hendrix- and she has the showmanship thing down also. But perhaps the thing that sets the two axe slingers apart is the fact that Jimi was absolutely hypnotizing when he played. While Wendy is good... Very good, even... It seemed that she struggled to keep the attention of the small crowd that had gathered to hear her perform. At one point she even ventured off of the stage to retrieve people from around the bar and bring them up to the stage area. She then proceeded to play a solo on her knees on the floor in front of the stage. The band kept the beat going while she feverishly shredded the strings of her guitar with a veracity not often seen since the living days of Stevie Ray Vaughn.

At that moment she was at least captivating... But it was too late in the set. One song later and the show was over.

The performance was absolutely great, one of the better shows I have seen at the House of Bricks. I don't blame Wendy for her lack of hypnotic skills. I think that it had more to do with the fact that nobody showed up... I mean, face it, you can't be hypnotized if you aint there.

Des Moines was blessed to be the opening stop on Miss Wendy's tour. She came out of the pits with the intensity of a flying dragon and force fed large doses of California jam down our throats, like an unstable mother feeding shards of heated sugar to a baby. We took it all... And wanted more. With that unmistakable Detroit beat backing up her west coast guitar, she and her band pounded our faces song after song, as if we were a crowd of twenty thousand and not a nearly empty bar room, as we were.

The opening band of the night, Smoking Blindfolded who was playing when we arrived, had amassed a pretty good crowd to watch them play. As a young local band, I'm certain that they had no problem roping in their following. While this is great for the venue and the promoters, it would have been nice if the fans had stuck around (including Smoking Blindfolded themselves) to support the rest of the acts on the bill. Talk about taking it on the run... As a fan of music, it is disheartening to watch the low act on the totem pole draw in a large crowd, only to have them pack up and beat it out of there before the next band takes the stage. (If I am wrong about this. please let me know.) And if I may be so bold as to say it, I think it is kind of rude too... Like biting the hand that feeds you. Aron and Chad put a lot of time and energy into building these shows, and leaving early with your entire fan base seems a little disingenuous.

But it is what it is.

The Maw came up next and set the tone for the night. Each time I watch these guys perform they seem to take it a step further. I really believe that it is just a matter of time before they embark on their own American tour, and get a chance to rub elbows with some of the heavy hitters in the rock and roll hemisphere. Forrest Lonefight was absolutely on fire as he always is, but on this night I paid particular attention to Joe Antelman's bass lines. He was grooving, man... I was wondering if he was playing especially well on this night, or if I had possibly missed something the other two times I watched The Maw play. I'm still trying to figure that out... All I know, is that he had me riding the groove train, and I didn't care where we were going. I am telling you my dear readers, in stone cold seriousness... If you only make it to one live show in Des Moines this year, go and see The Maw. Do it now before they are systematically gone forever. 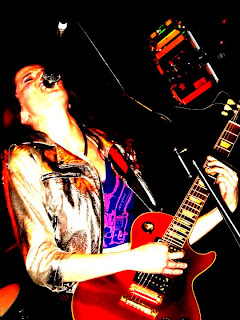 On this night however, the star was The Fabulous Miss Wendy. Over the last few months she has endured her share of hardships, and this tour in a sense, is her victory lap. While the crowd was thin inside the House of Bricks on Thursday night, those of us who attended were treated to an evening we won't soon forget. Wendy is stronger than ever...  As I talked with her in the past, I got the sense that she was overcome with worry and apprehension... I didn't get that from her on Thursday. She seems poised to take the next step in her musical journey and use those setbacks as a stepping stone to the next level. I really don't have any doubt that she will accomplish any less than that, especially with this new band she has assembled.

Miss Wendy's band is REALLY GOOD... And those of you who didn't make it to the show not only missed a rising star, but also something very majestic.

The shame you must be feeling...
Posted by T.Church at 11/09/2010
Email ThisBlogThis!Share to TwitterShare to FacebookShare to Pinterest

I do feel some shame, but alas, I have a wife and two little kids that occupy most of my time. I am outside of the music scene and have little opportunity to break back in. All I hope for is a few shows I can make it to each year, and a steady flow of music to my library.

I am happy to live vicariously through your ramblings and photos, please keep the dream alive for the rest of us.