Rock Island is a landmass nestled between two rivers, the mighty Mississippi and the lesser known Rock River in eastern Illinois. Interestingly, it's not an actual island.. but it does contain historic elements of rock - as in rock and roll.

The Rock Island Brewing Company was creating delicious crafts long before breweries became a mainstay in Des Moines, and their soundsystem has been kicking out the jams with live music since it's creation in 1979. Needless to say, it has been a destination for us knuckle dragging low-lifes who, since the late '80s and early '90s when we needed a good rock and roll show to fuel our angst and social awkwardness. At the time, the closest comparison we had in Des Moines was Hairy Mary's or the Laughing Iguana. Neither was serving craft beer.

So when I heard GOSH! on Iowa Public Radio last week, and learned that they were from Rock Island, it came with a flood of nearly forgotten memories. It didn't hurt that the band has a unique sound that caught my attention - I immediately used my Shazam app to identify the band - it came up blank. So when the DJ mentioned that they were GOSH! from Rock Island, I made a mental note. When I got home later that night, I surfed Youtube digesting all that I could.

GOSH! mixes garage pop and psychedelia in a unique way that seems mysteriously complex but delightfully simple. I was surprised to learn that they were a three-piece band as I swore I was hearing more than what was actually happening. According to Claire they took their name from a Beach Boys song. "Padraig and I were taking a Clickhole quiz together titled 'How many Beach Boys songs do u know?,'" she explained. "GOSH! was one of the answers and we decided it sounded like a good band name."

Listening to them I hear elements of White Mystery, Black Box Revelation, and The Flaming Lips - when the Lips were more entwined in psychedelia than in commercial pop.


What are the top 3 band rules you have set for each other as you go on tour?

Padraig- I think our only real rule for tour is to not get too fucked up to play and load gear. Other than that it's a free for all. Personally, I try to make a rule of not eating too much shitty food. It's really easy to get sick on tour and eating McDonalds every day definitely exasperates that. I also try to drink a ton of water so I wind up having to stop the van to piss like every 20 minutes. It's fun.

Claire- 1. Keep low expectations: Tour can be hard and you never know what kind of show you're gonna play. Often times people don't pay attention to your set, or the show wasn't promoted very well and only 5 people show up. As long as you don't expect the rock star treatment you will end up havin a good time and meeting cool people. 2. Don't drink too much before we play: this is a rule for obvious reasons. We are on tour to share our music, but if we are too fucked up to play then our set we would suck and no one would care. 3. Take advantage of the amazing cities we visit. I like to map out our trip in advance and find cool things to do en route. For example, I learned about the Cryptozoology museum in Portland, Maine and I'm super stoked to check that out.


Your band consists of two males and a female. How does that paradigm work while touring - Is there a relationship involved, and if so, how bad does it suck to be the odd person out?

Padraig- Gosh! started when Claire and I began dating and started writing songs together. Kyle is one of my best friends of all time and jumped on board.

Claire- Yes, Padraig and I have been together since the start of GOSH! I met Padraig's friend, Kyle around the same time and he quickly became my best buddy. It just made sense to get him in the mix on drums.

Kyle- They're my best buds so it's not really a thing for me. Besides, more groupies for me. 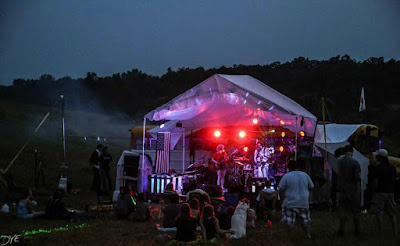 You have a gig in on April 19th in Portland, Maine, which you mentioned is the home of the International Cryptozoology Museum. Tell me about any paranormal experiences you might have had, or perhaps a Bigfoot or UFO sighting in your past.

Padraig- We're super excited to go to the Cryptozoology Museum! I don't have any first hand experience with the paranormal, but lots of people in my life have. For instance, my mom grew up in this colonial house in Virginia right on the Chesapeake. And she always said there was a civil war burial ground on the land. Well my whole life she always told me about the variety of ghosts she'd encounter. And one ghost was a woman who had no feet. She just levitated. Well one of my cousins was out in the yard with a metal detector a few years ago and came across a shallow brick tomb. All that was inside were a pair of skeletal feet.

Claire- Hell yeah the museum is gonna be SO DOPE. I found out about the Cryptozoology Museum while planning the trip and immediately said "yaas we have to gooo!"  My dad is a huge Sasquatch believer so i'm lookin' forward to bringing a souvenir home for him. I haven't experienced any real paranormal activity, but my brother told me all those classic scary stories like Bloody Mary and Candy Man when I was way too young. I couldn't sleep for what seemed like months and hallucinated creepy clowns and ghosts all the time.

Kyle- I've actually seen a couple UFO's. My buddy's parents were having some sort of get-together so I figured free food and drinks sound good. We were outside jamming and people started to notice something in the sky, and we're like yeah whatever OK, but we went to check it out and a group of like 15 of us watched a light that was pulsating and would get really bright and then dim as it circled around the sky. It was pretty weird.


When was the last time you did something completely stupid and said to yourself, "Man. That was fucking dumb."?

Kyle- I partied all night Saturday until 8 AM Sunday morning and that was pretty fucking dumb. I'm fucking 30.

Padraig- Yeah I got really drunk, partied way too hard and didn't go to work the next day. Lost that job. Definitely beat myself up over that one. I've been doing pretty alright since then. Did have a hard time figuring out the gas pumps outside Milwaukee recently though. That was kinda dumb.


Not sure how it happened, but at the moment I have "Careless Whisper" by George Michael stuck in my head. What song is currently driving you insane?

Claire- Growing Pains theme song. I just googled this to find out, I guess it's a song called "As Long As We've Got Each Other" by B.J. Thomas


Please describe the most awkward moment you have ever had while performing onstage.

Padraig- For this current band it was a show in Minneapolis. That city is one of my favorite places to play. We have a ton of really good friends who make amazing music up there. And the shows are always amazing. But this last time we were there, we had the sound guy from hell. He was just the typical macho moron saying sexist shit talking about how he's been doing this for so long and that there's no way 3 bands are gonna be able to play in four hours and all kinds of bullshit. Well he just put a real damper on the show. And basically we were so worked up and nervous for our set that like halfway through a song we just fucking forgot it and had to stop. Wound up only playing four songs. And it's a song we've been playing forever! That was probably the most awkward thing that's gone down on stage for Gosh! But now it's just a funny story. There were definitely some pooped pants on stage with the last band I was in. That's all I'll say about that though.

Claire- I haven't been performing for very long, and I always do it almost completely sober, so nothing too awkward has ever happened to me. I guess I would have to agree with Padraig, I totally fucked up a song and we had to just stop playing it half way through. The sound guy was such an asshole, when he was passing out wrist bands he said "so are you actually playing tonight?" He assumed I wasn't a musician because i'm a girl. 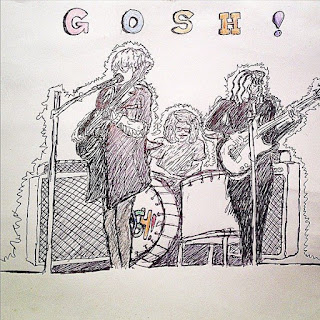